Reviewed here by Sabu Advani, the editor of the Flying Lady Magazine of the Rolls Royce Owners Club 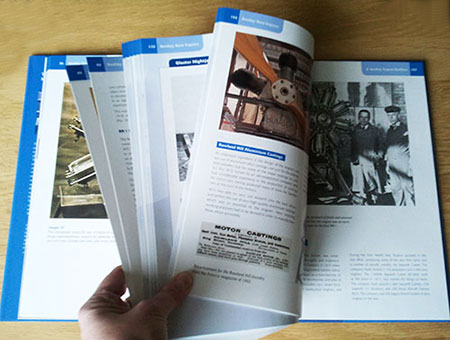 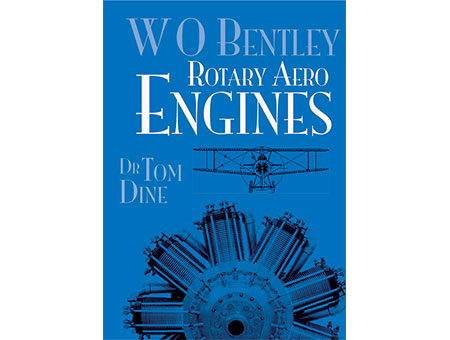 "While WO Bentley is known to our readers, and the world in general, as the man behind the iconic cars that bear his name there has of late been a growing recognition that it is his aero work that must be counted as the towering engineering achievement. That it is the WO Bentley Memorial Foundation that is championing this cause in the form of this excellent book is all the more laudable as Bentley’s aero work, strictly speaking, falls outside the foundation’s stated mission of “advancing the public knowledge and appreciation of the Bentley Motorcar and its history.” Moreover, Bentley the man created these important, game-changing engines but they are not a product of Bentley the firm but instead the British Admiralty. This distinction is not merely a matter of semantics but has implications on who the keeper of that particular part of industrial heritage is.

Kudos, then, to the WOBMF for taking ownership of this aspect of Bentley history too. Readers with a long attention span may recall that a publication with a similar title was published by the WOBMF in 2003 but at 28 pages it amounted to merely a booklet, important and necessary but tantalizingly short. Its author, Graham Mottram, Director of the Fleet Air Arm Museum, wrote a most sympathetic foreword to this new book.

Foundations, by their very nature, are rarely rolling in money and this alone should serve as a call to the readership to support such worthy projects as the publishing of books. And this one must count as an especially high achievement, being a proper, well-made, full-size book with all the trimmings in every regard (paper, printing, binding, photo reproduction etc.) able to hold its own against any commercial, big-leagues publication.

Author Dine (who, incidentally, runs a 3L Bentley but is better known in AC circles) has an analytical mind and the rigor he exercises in his professional life as a compliance consultant in the pharmaceutical industry is evident in many aspects of the book, such as an uncommonly detailed Table of Contents and a proper Apparatus in the form of a List of illustrations, source and reference material, and several Appendices. All this bodes well for an account that both introduces new facets to the record but also has to unwind those bits we now know to be wrong but that just won’t die (WO’s influence on Royce adopting aluminum for auto and aero pistons = yes, the old chestnut of the abandoned Mercedes GP car informing the design of the R-R Eagle, Hawk and Falcon aero engines = no)

The reader who is new to the world of piston aero engines may want to start with Ch. 2 to grasp their operating principles so as to better appreciate Ch. 1 which, using the work of eight different designers, summarizes the rise (yeah!) and fall (bummer!) of this method of propulsion.

A timeline enumerating Bentley’s automotive activities introduces his experiments with aluminum-alloy pistons without which the subsequent treatment of his development of the AR1 and BR1 aero engines would be lacking context. An important character trait that emerges in these early pages is a quality for which WO would receive undying praise already in his lifetime: his consummate care for the pilots who would fly his motors into battle and trust him to have built them well enough to bring them home. This is not something the owner of a Cricklewood car necessarily thinks about but it is inseparable from the personality that would see his firm garner a string of epic and unprecedented victories on the track only to loose the company.

The BR2 is covered in equal depth, along with a presentation of the various aircraft propelled by these motors as well as the several manufacturers that built them. A look at museums that display surviving engines and surviving Sopwith airplanes conclude the book.

From period photos to technical drawings to reproductions of memos and the like, the book is splendidly illustrated. A folded 32 x 24” sheet shows a General Arrangement drawing of an AR1 for your bedroom wall (what, you don’t do that anymore??). The truly curious will find on the accompanying CD an assortment of company and Air Ministry booklets, instruction books, parts lists etc.

All in all, a most satisfying treatment, more comprehensive than any other—even if Dine himself allows that some questions may never be answered, simply because the tooth of time has gnawed away too much. This, too, should be a reason to buy this book and thereby support the organization whose very purpose it is to prevent the loss of that which can never be replaced or retrieved once it’s gone.

PS: This book was reviewed in FL15-1 right when it first came out so as to make readers aware of its existence. Not having an actual book to hand we picked up a review from the British WW 1 aero magazine Cross & Cockade, thinking that a review by such specialists could hardly be bettered. Now that we have seen it, a few more words seemed in order to commend the book to a wider audience. —ED

The Flying Lady is the International Club for Rolls-Royce & Bentley Owners, serving over 7,500 members in more than 50 countries

Read more about the book and find out how to order >>

About the WO Bentley Memorial Foundation

The WO Bentley Memorial Foundation was established in 1998 by members of the Bentley Drivers Club. We are a registered charity dedicated to guarding and promoting the heritage of WO Bentley's life and engineering.